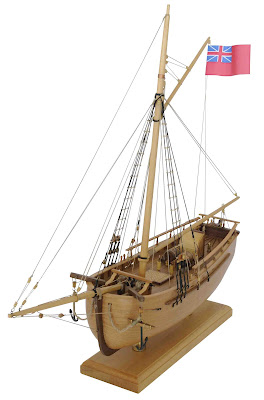 The Sloop Norfolk was built on Norfolk Island in 1798. The 25 ton sloop was constructed from Norfolk Island pine. Governor Hunter lent the Norfolk to Bass and Flinders with the task of proving the existence of a strait between the mainland and Van Diemen's Land (named Tasmania after 1856). Flinders and Bass were under orders to pass through the strait and return by the south of Van Diemen's Land.
Flinders, Captain, George Bass, and there eight crew departed Port Jackson on the 7 October 1798. They had been allowed twelve weeks for the voyage. In her they completed the first circumnavigation of Van Diemen's Land.
They made many important discoveries on this voyage. On the north coast of Van Dieman's Land they spent time exploring Port Dalrymple, the future site of Launceston. On Christmas day they climbed Mount Wellington which now overlooks Hobart, Tasmania's capital. The Norfolk sailed back into Port Jackson on the 12 January, 1799. Governor Hunter, upon Flinders recommendation, named the newly discovered passage, Bass Strait.
Our model kit of the Sloop Norfolk is a double plank on bulkhead construction with laser cut plywood. The kit comes complete with all timber, rigging cord, and wooden and metal fittings. All parts and fittings are of the highest quality. It Includes a detailed instructions with photographs and diagrams, and construction plans.
We also have available a DVD on "The complete guide on: How to Build the Colonial Sloop Norfolk". Which provides the viewer with comprehensive narration and demonstration by Master Modeller Leon Griffiths as he builds the Sloop Norfolk. Leon takes the viewer through assembling and planking the hull, building the deck furniture and completing the standing and running rigging. Leon presents each step of its construction demonstrating his many model ship building tips and techniques.
Size: Length: 590mm Height: 450mm Width:130mm, Skill Level 2 and a scale of 1:36
The price of this wonderful model is $257
The Colonial Sloop Norfolk and the Complete guide on How to Build the Colonial Sloop Norfolk is available in a combo pack for $272
Place your order online or call our office to order this piece of Australian history!
Posted by Modellers Shipyard at 1:53 PM